I International Student Seminar on Asian and African Studies 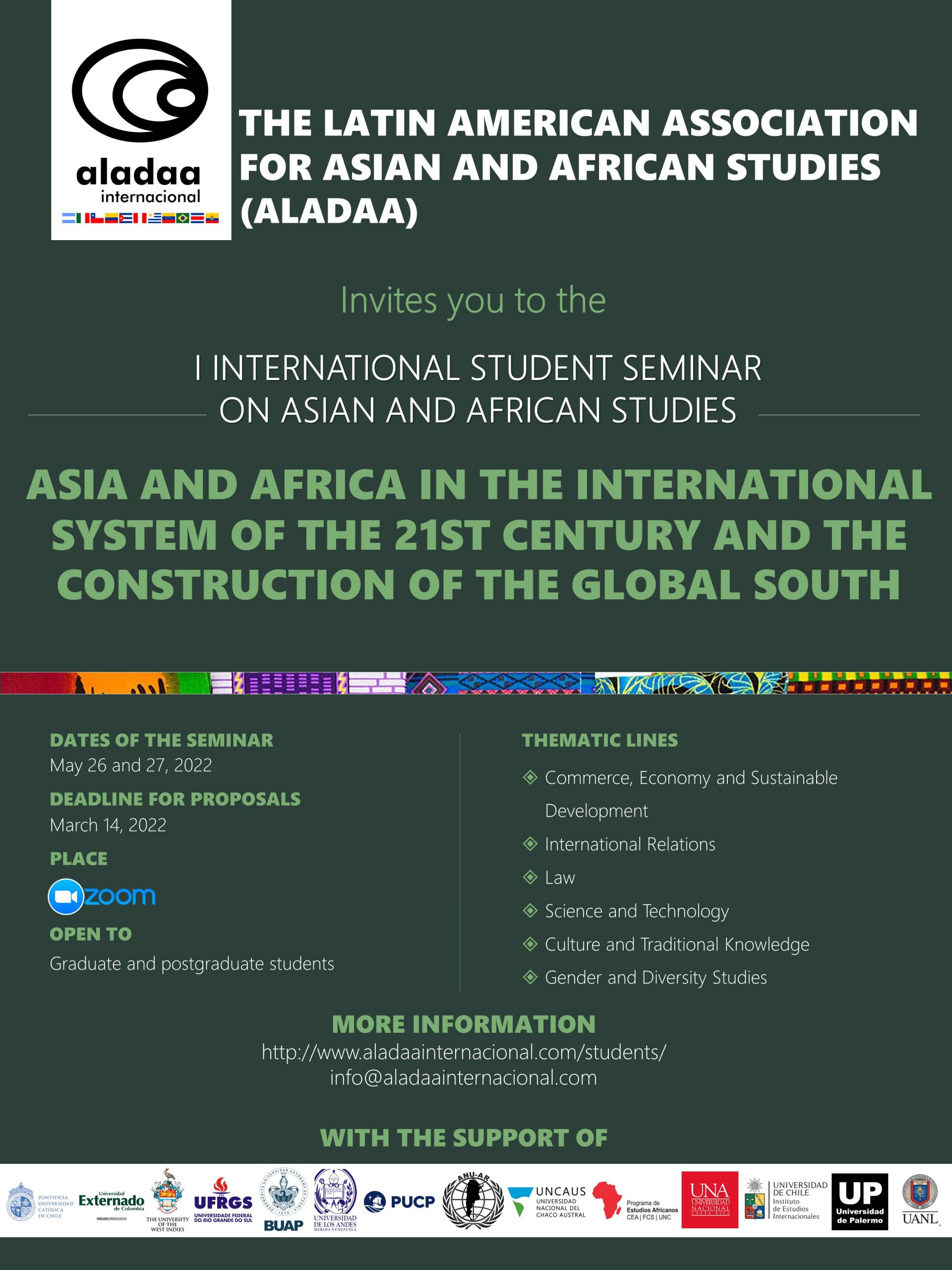 Free Registration to the Seminar here

THE LATIN AMERICAN ASSOCIATION FOR ASIAN AND AFRICAN STUDIES (ALADAA)

I INTERNATIONAL STUDENT SEMINAR ON ASIAN AND AFRICAN STUDIES

Throughout this century, the international system has witnessed a significative process of transformation in the global structures of power, perhaps the largest in history. The rise of emerging countries such as China, India or Brazil has created new dynamics that have altered the traditional centres of power. Also, the increasing influence of China and the importance of Russia in the global scene have threatened the status of the United States as the only superpower in the world.

But despite this positioning of large and powerful states from the Global South like China, Russia, India or Brazil, there exists a group of smaller, yet increasingly important countries that are emerging as key and influencing actors in the international system. South Africa, Turkey, Indonesia, Nigeria, Mexico, Egypt, Vietnam, Argentina, Chile, Colombia, Peru, amongst others, are usually recognised as part of this category of emerging powers from the Global South.

However, not only these countries have managed to impact the current international system. Through international and regional organisations such as the African Union, the Gulf Co-operation Council or ASEAN, countries with smaller influence have succeeded in increasing their participation and global power by forming alliances with neighbours and like-minded states. In conclusion, from Singapore to Algeria, from Kazakhstan to Angola, countries from the Global South are reaching new levels of influence on the political and economic dynamics of the international system.

In order to study this phenomenon that involves not only Africa and Asia, but also Latin America and the Caribbean, ALADAA and the participating universities invite undergraduate and postgraduate students to present their research in the I INTERNATIONAL STUDENT SEMINAR ON ASIAN AND AFRICAN STUDIES which will take place online (via zoom) on May 26 and 27, 2022 with the title “ASIA AND AFRICA IN THE INTERNATIONAL SYSTEM OF THE 21ST CENTURY AND THE CONSTRUCTION OF THE GLOBAL SOUTH”.

OBJECTIVES OF THE SEMINAR

STRUCTURE OF THE SEMINAR

The Seminar will last two days in which students will present their research results. Proposals will be examined by an academic committee according to the general topic of the seminar and the different thematic panels. Keynote speakers from Asia, Africa, Latin America, and the Caribbean will also be invited. The official language of the event will be Spanish , however, the academic committee will also consider presentations in Portuguese and English.

April 18th, 2022:
Publication of the final programme for the Seminar

May 9th, 2022:
Deadline for articles that wish to be published in the memoirs

In order for papers to be included in the memoirs, they must include:

WHERE TO SEND THE PROPOSALS?

Proposals must be sent before the aforementioned deadlines to info@aladaainternacional.com

Participation in the seminar is free.
Certificates will be provided by the organising committee for all presenting and assisting students providing they fill out the Seminar’s registration form.

Free Registration to the Seminar here