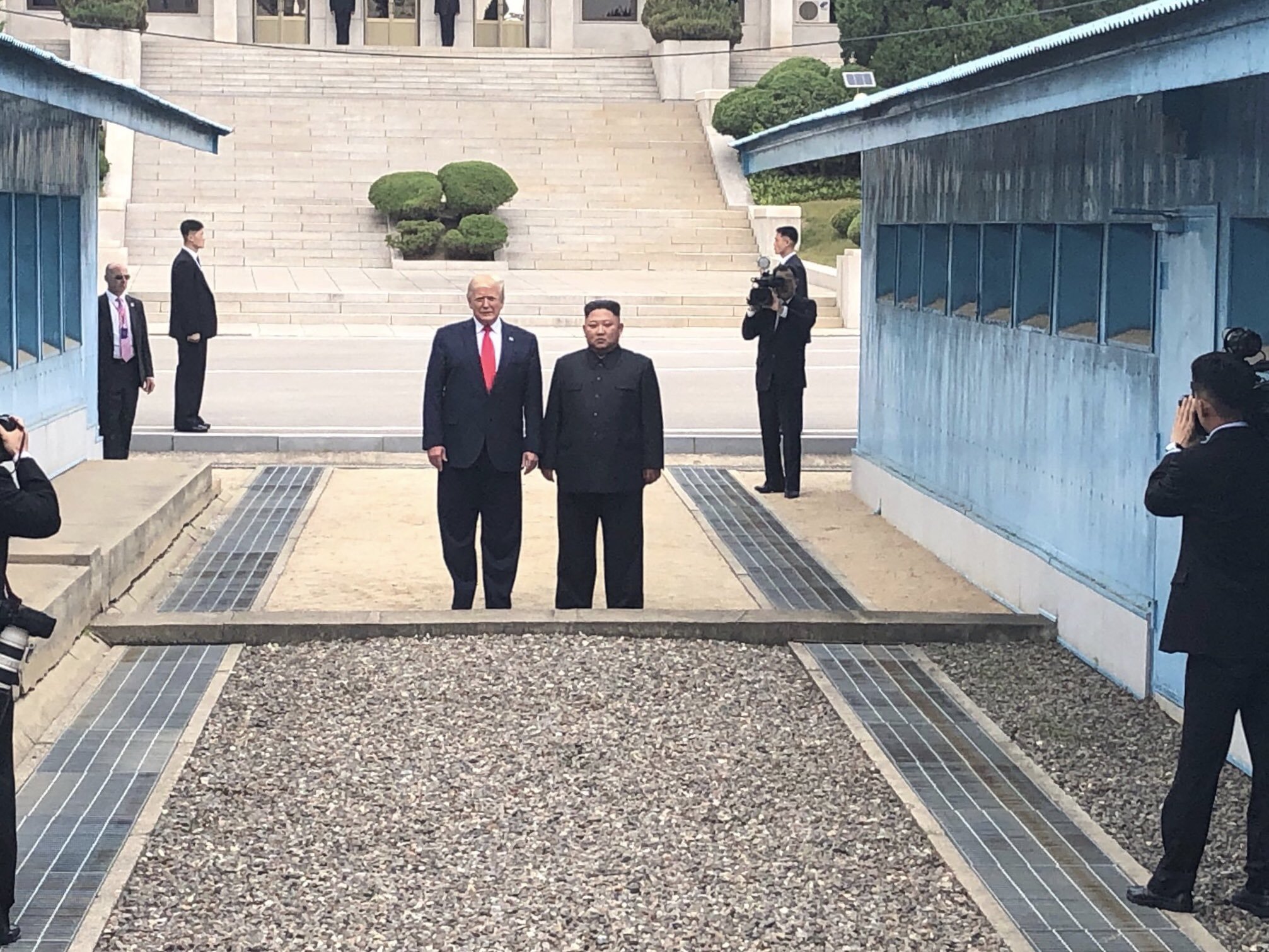 The South Korean Conciliatory Policy and the North Korean Nuclear Crisis: The Origin of the Game

When Trump visited the Republic of Korea (ROK) on 30 June 2019, many people expected the United States (US)–North Korea relationship, which had been stuck since the Hanoi summit, to move forward again as he held a sudden meeting with Kim Jong-un in Panmunjom (Baker and Crowley, 2019). It was also expected that the South Korean role of ‘mediator’ would re-emerge, considering the meeting was arranged during Trump’s visit to the ROK. Contrary to these expectations, however, North Korea continued to conduct multiple rocket and missile launch exercises even after the June meeting in Panmunjom and to issue rhetorical threats towards South Korea (Culver and Seo, 2019).

Trump, in response to these provocations, downplayed the significance by mentioning, ‘There have been no nuclear tests. The missile tests have all been short-ranged — no ballistic missile tests. No long-range missiles.’ He also stressed that there was no rupture in North Korea–US relations (White, 2019). In this regard, it may be interpreted that despite the unstable situation, the US still has room for negotiations with North Korea, with hopes for its denuclearisation. However, for the Moon Jae-in administration, the situation reminds them of past failures because its appeasement policy has repeatedly failed due to conflicts originating from the North’s nuclear programme and military provocations.

South Korea’s first North Korean policy aimed at improving inter-Korean relations through dialogue and negotiation with a tangible result was the Kim Dae- administration’s Sunshine Policy. Previous governments had pursued policies towards North Korea with a firm goal of ‘unification of the Korean Peninsula’. On the other hand, the Kim Dae- government recognised the North Korean ‘regime’ as it was enhanced direct contact and cooperation to promote a collective identity between the two Koreas (Choi, 2010). Because the two Koreas’ cooperation frequently failed due to military and political issues, Kim Dae- set the policy principle of Jeong--bun-, which means the cultural and economic cooperation with North Korea in the private sector is separate from political and military issues (Moon, 2001; Choi, 2010).

At that time, the situation of international politics surrounding the Korean Peninsula was also favourable for the Sunshine Policy. After the first North Korean nuclear crisis in 1993, the US and North Korea agreed that the US would build a light-water reactor and provide heavy oil to the North and that North Korea would give up its nuclear programme through the ‘Agreed Framework’ on 21 October 1994 (Perry, 1999). This international political environment has served as an excellent platform for the promotion of the Sunshine Policy of the ROK, and the policies have paid off in terms of inter-Korean exchanges.

In 1998, South Korean company Hyundai took the initiative in negotiating with North Korea, actively supported by the Kim Dae-jung government, allowing South Koreans to travel to the North’s territory of Mount Kumgang for the first time since the division of the peninsula. The project to create the Kaesong Industrial Region also began in 2000 when Hyundai and North Korea agreed to set up a large-scale industrial complex in the North Korean territory of Kaesong. In addition, the first inter-Korean summit since the division of the peninsula was held in the same year. President Kim Dae-jung received the Nobel Peace Prize for his devotion to defusing tensions on the Korean Peninsula.

In contrast to the improving relations between the two Koreas, the situation around the Korean Peninsula was getting more and more tense. The construction of the light-water reactor seemed to go smoothly with the establishment of the multinational consortium, the Korean Peninsula Energy Development Organisation (KEDO). However, the situation changed dramatically after North Korea admitted the existence of its nuclear programme to Assistant US Secretary of State for East Asian and Pacific Affairs James A. Kelly during his visit to North Korea in October 2002 (Kim and Lee, 2011).

The second North Korean nuclear crisis began later when the US declared it would disregard the Agreed Framework. As relations between the US and North Korea began to become strained, there was a crisis in inter-Korean relations. The Kim administration maintained its strict political notion of division between private culture/economic exchange and governmental political/military issues even after the North Korean military provocation, the First Battle of Yeonpyeong, on 15 June 1999. However, criticism of the Sunshine Policy began to spread in the population as South Korean soldiers were sacrificed in the Second Battle of Yeonpyeong on 29 June 2002.

The appeasement policy was on the verge of losing momentum due to domestic opposition and the second North Korean nuclear crisis. However, the conciliatory policy gained new momentum as soon as the progressive Roh Moo-hyun was elected as president due to the failure of the candidate unification in the conservative group and the support of the young generation. The Roh Moo-hyun government followed the previous government’s North Korea policy principles, a strict separation between the private and governmental sectors and diffuse reciprocity, which prevented insistence on direct compensation for current actions towards North Korea.

Tours to Mount Kumgang were continuously stimulated by expanding possible access areas, and cultural and economic cooperation between the two Koreas was steadily expanding after the first goods produced by a South Korean company using North Korean labour in the Kaesong Industrial Region were shipped in December 2004. The international environment was also improving, although uncertain. After the second North Korean nuclear crisis, the Northeast Asian neighbours pushed for the six-party talks to resolve the North Korean nuclear issue in the framework of a multilateral agreement, and on 27 August 2003, the first six-party talks with the participation of the US, North Korea, Japan, South Korea, China and Russia were held. After repeated suspensions and resumption, the six-party talks were able to produce a result of issuing a joint statement of the six nations on 19 September 2005 (Yu, 2006). Accordingly, it seemed that the appeasement policy promoted by the Roh Moo-hyun administration could achieve the ultimate objective, peace on the Korean Peninsula, through international cooperation.

However, the process of actually implementing a joint statement on the six-party talks did not go as smoothly as many participant countries had hoped. Before the joint statement was made, on 15 September 2005, the US inflicted a sanction on Banco Delta Asia Bank with a money laundering concern, which directly led to the bank freezing North Korean accounts. These sanctions also affected other banks that were dealing with the North, which significantly damaged the regime’s foreign currency management (Byman and Lind, 2010). As the situation did not improve even after the joint statement of the six-party talks, North Korea engaged in military provocation by conducting a ballistic missile test on 4 July 2006.

After that, the North conducted a nuclear test on 9 October of the same year and returned the negotiations to the starting point. Despite this crisis, the ROK and its neighbours did not abandon hope for a peaceful resolution. The six-party talks continued and successfully revived hopes for denuclearisation when it agreed to denuclearise and lift sanctions on North Korea on 13 February 2007. In addition, hopes for peace on the Korean Peninsula were heightened when the inter-Korean summit was held in Pyongyang from 2–4 October 2007.

The problem, however, was the chronic distrust between North Korea and the US. Already since this period, North Korea has insisted on phased denuclearisation, while the US has consistently insisted on Complete, Verifiable and Irreversible Dismantlement (CVID) of North Korea’s nuclear programme. It would have been difficult for North Korea to give up its nuclear programme without a pre-emptive US sanctions lift and for the US to provide what North Korea wanted in the absence of concrete denuclearisation, considering that the North continued its deception.

For this reason, North Korea has not only actively discouraged International Atomic Energy Agency (IAEA) inspections of its denuclearisation but has made them virtually impossible, citing various caveats. In addition, the US has not immediately implemented the removal of North Korea as a state sponsor of terrorism and sanctions, which has led to the North’s growing suspicion. In Korea, the Lee Myung-bak administration, the conservative government, took office in 2008, and due to North Korea’s hostile activities, the unilateral conciliatory policy was losing its momentum. Eventually, the six-party process of denuclearisation of North Korea ended with Pyongyang declaring its nuclear development through a nuclear test on 25 May 2009.

Although the Korean government’s appeasement policy was clear in its direction and successfully produced the desired results in the course of its policy implementation, it ultimately failed to achieve its objective. The first reason is that the South Korean government overlooked the US’ role in the North Korean nuclear crisis. While inter-Korean relations remain an issue between South and North Korea, a nuclear crisis is bound to involve the U.S. and the demands the North made for denuclearisation were not things that the South could provide arbitrarily. The second reason is that neighbouring countries’ interests have not been properly managed. The six-party talks were an innovative concept, but the result was that the negotiations failed to progress because each country only considered their own interests. The Republic of Korea, North Korea, and the United States have learned these lessons for ten years, which has changed the direction of future policy initiatives.